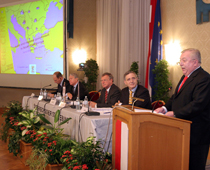 Conference on local government in South-East Europe (Vienna, 14/15 Oct): CEMR to act as bridge between South East Europe and the EU

Over 150 participants attended CEMR's conference on local and regional government in South-East Europe, in Vienna, on 14 and 15 October 2005.
They included representatives from local and regional governments from some 20 countries and territories, including Serbia-Montenegro, Bosnia, Croatia, Kosovo, Albania, Romania, Macedonia, Moldova, Hungary, Bulgaria, Czech Republic, Slovakia... as well as representatives from the Austrian government, the EU Commission, the European Parliament, the Council of Europe...
Participants agreed that it is essential to :
They also asked CEMR to take any initiative aiming at developing relations and exchanges of experience with the local governments association of South East Europe, and to organise a secondr similar meeting in Europe within 12 to 18 months, and that smaller, thematic workshops, still aimed at local governments, will be held in the region.
As the host of the meeting, CEMR president and mayor of Vienna, Michael Häupl, opened the conference. He recalled Vienna's and Austria's role in the region, as well as the importance of CEMR's work and network of association to promote local democracy and foster links between local governments across the whole of Europe.
Member of the European Parliament, Hannes Swoboda, warned representatives from South East European countries against assuming that accession to the EU is a foregone conclusion: conditions have to be met, he explained. The adhesion process could be a lengthy one.
The State Secretary from the Austrian ministry of Foreign Affairs, Hans Winkler, said that South East Europe and in particular the Balkans will be one of the upcoming Austrian EU presidency's priorities: The countries of the region will not be considered as "a package" but on an individual basis. He also praised CEMR, saying that more conferences as this one should be held: We must involve citizens more, and this will be best done through local government, hence the importance of today's meeting.
The president of the Union of Municipalities of Montenegro, and of the National Associations of Local Authorities of South East Europe (NALAS), Tarzan Milosevic, gave an overview of NALAS's contribution as a network enabling members to exchange experiences. He stressed the importance of stability in the region, without which, he said, there can be no improvement in other issues such as security, transport, the economy, the environment...
The President of the Congress of Local and Regional Authorities of Europe, Giovanni Di Stasi, called for increased cooperation between the Congress and CEMR in South East Europe.
Representatives from each country and territory took the floor in turn to explain the structures and needs of their respective local and regional governments. Representatives from Moldova urged the European Union, CEMR and other associations to include their country in all their initiatives towards the region; representatives from Serbia-Montenegro emphasised the difficulties they are experiencing: Historically, Serbia has always been highly decentralised. This decentralisation was abolished at the stroke of a pen at the end of the 20th century, and now we must "re-learn" and "re-teach" it to our towns and municipalities.
The conference was also the occasion for CEMR's rapporteur, the secretary general of the Union of Cyprus Municipalities, Athos Germanos, to present the preliminary results of CEMR's survey on the needs of the associations of local authorities in South East Europe. The preliminary findings show a strong desire from the relevant associations to devote more time and funds to European activities and networking. Other priorities include capacity building, boosting administrative structures and good governance.
The second day of the meeting (15 October) was devoted to two workshops:
. Cooperation in practice - exchange of experiences between associations of local and regional authorities
. Financing local infrastructures: what support from the EU and donor organisations
The conference was organised in collaboration with the Austrian association of cities and towns
Photos of the meeting
The full agenda for the seminar on local and regional government in South-East Europe
Participants list