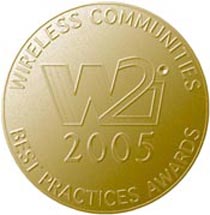 Two European communities, together with four others from Brazil, Nigeria and the US, have been awarded the first-ever Wireless Communities Best Practices Award, at the Wireless Internet Institute (W2i) Digital Cities Convention, San Mateo Marriott, from 10 to 12 October, 2005.
Portsmouth (UK) and Westminster (UK) were the European winners. They were chosen by a jury of experts amongst 12 finalists, selected from over 40 nominations.
Because of Portsmouth being an island city, all the traffic from and to mainland England has to pass through only three narrow bridges and seven lanes. To encourage greater use of the city's 300 buses and ease traffic congestion, Portsmouth has connected its GPS bus tracking system to a wireless network to provide arrival and departure times on LCD displays in the bus shelters. On top of that, Internet has been made accessible at each of the bus stops.
The city council of Westminster has deployed a wireless network and 40 mobile CCTV cameras in London's West End to help police control crime and monitor different types of activity, including terrorism. The network is also supposed to increase coordination among the city's thousands of frontline workers, including parking attendants, inspectors, street cleaners”¦ Wireless-enabled PDAs in the hands of parking attendants and inspectors improve reporting quality, reducing the number of public complaints.
Amongst the finalists, a third European one was nominated but did not win the award, the national association of the small towns of Italy (A.N.P.C.I.). The A.N.P.C.I. made it to the finals because of its initiative to provide incentives to the private sector to bring wireless alternatives to its associated villages across the country. Often no broadband connectivity is offered in small, rural villages because the low population density and the challenging terrain make it financially and physically difficult to provide.
With this initiative, the W2i wants to pay tribute to local governments around the world implementing broadband-wireless solutions for cities, counties and regions.