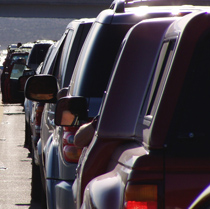 Since Monday 3 January 2006, drivers have had to pay a congestion charge to enter the Swedish capital city, Stockholm. This initiative, inspired by the London experience, has been launched for a trial period of six months and will be followed by a referendum on its permanent implementation.
Every passage in and out of the inner city on weekdays from 06.30 to 18.29 will be charged between Skr10 (1€) and Skr20, depending on the time of the day. However, taxis, emergency vehicles, foreign-registered cars and -clean' cars, will be exempted from paying the tax. A maximum of SKR 60 (6.25 Euro) can be charged per day.
The payment can be done automatically through a device installed in the car, or through the bank, stores or internet.
The aim is to reduce congestion, increase accessibility and improve the environment. The Stockholm administration started the preparations for this initiative in August 2005 by extending the public transport system in order to give travelers who are willing to leave their car at home a decent alternative. Revenues from this trial scheme will be invested in Stockholm's public transport service.
For more information, contact miljoavgifter@stadshuset.stockholm.se at Stockholm's city hall.