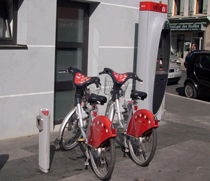 One year after its launch, Vélo'V, Lyon's rent-a-bike scheme, has attracted over 50,000 users. Between 10,000 and 20,000 bicycles are hired everyday.
Every big city seeks to solve its transport problems such as traffic jams in the center, parking problems, pollution, etc. this is why Lyon launched, one year ago, its rent-a-bike scheme.

Seven days a week, and at a cost one 1€/hour, anyone can rent a bicycle from one of the 200 renting spots. The bike can be left at any Velo'v station, and is equipped with an anti-theft device.

Other cities, Tallin in Estonia for one, are envisaging setting up a similar scheme.
Velo'v website (only in French)