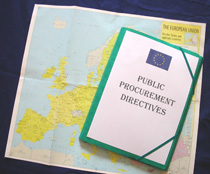 The European Commission has issued a communication (24 July), setting out its understanding of the EU Treaty rules that apply to public authorities - especially local and regional authorities - awarding contracts for goods, services or works that are either:

(a) below the financial thresholds of the existing public procurement directives,


(b) or to some service contracts which are above the threshold, but for which the directives lay down very limited rules.
Public procurement forms a very important part of the European economy, and for most major purchases by public authorities, there are legal rules, at European level, set out in the public procurement directives adopted in 2004, which apply to contracts above specified financial 'thresholds". However, there has been some uncertainty as to how far basic rules of the EU's Treaties apply, even in cases outside the 2004 directives.
The Commission's guidance, which includes suggestions as to good practice, is not legally binding, but sets out its view of the situation following a number of European Court of Justice decisions which in particular have stated that some advertising of proposed contracts should be undertaken by public authorities even where the public procurement directives do not apply.
In the Commission's view, the Treaty rules and standards apply only to contracts 'having a sufficient connection with the internal market", and may not apply to cases involving a very modest financial value. It is for the individual local authority to make this evaluation on the facts of the case.
The new guidance does not cover the area of service concessions, i.e. contracts to provide services for which the contractor charges the user directly, as against getting 100% financing from the public authority for carrying out the task. These concessions are also excluded from the scope of the 2004 directives, though the Commission plans to put forward proposals for new legislation to cover them.
CEMR notes, moreover, that the guidance does not cover some key areas of current controversy, including the award of contracts to companies owned or controlled by local governments ('in-house"), and to companies set up by a group of local authorities to deliver a local service efficiently ('intercommunal arrangements").
The Court of Justice has appeared to undermine the principle of local self-government in some recent cases on in-house and joint arrangements, even where the Public Procurement Directives do not apply, says CEMR secretary general Jeremy Smith . We are pleased that the Commission has not walked into this minefield in this communication, because there is a need for a better dialogue on these issues. However, the law on in-house and intercommunal arrangements does need to be clarified and put right. The positive concept of the internal market must not be damaged by a new fundamentalist ideology of centralization and denial of local democratic choice in service delivery.
Commission interpretative communication on the Community law applicable to contract awards not or not fully subject to the provisions of the Public Procurement Directives (available in English, French and German)

CEMR activities in the field of public services and procurement