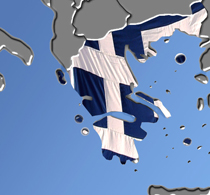 The first round of local elections in Greece on 15 October saw the conservatives, New Democracy, take control of Greece's two biggest cities: Athens and Thessaloniki.
The socialist party Pasok took control of Pireaus and retained the prefecture of Athens and Pireaus, the region where almost 50% of Greece inhabitants live.
Across the country, New Democracy remains the strongest party, controlling 26 prefectures, but loses ground to the socialists (15 prefectures).
The second round of the elections will take place on Sunday 22 October where no candidate has scored more than 42% of the votes.
Local and regional structures in Greece
Central union of towns and communities of Greece (KEDKE)