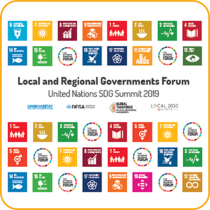 A CEMR-PLATFORMA joint delegation of local and regional politicians is attending the United Nations General Assembly (UNGA) in New York, from from 23 to 27 September. The climate action and the implementation of the UN sustainable development goals will be at the front of the agenda, with the Climate Action Summit and the SDG Summit.

This time, the CEMR-PLATFORMA delegation is attending several conferences and sessions around the Climate Action Summit and the SDG Summit, including the 2nd Local and Regional Governments’ Forum (co-organised by the Global Taskforce) on Tuesday 24.

The same day, the mayors and regions’ elected officials are meeting representatives of the European Commission from DG CLIMA and DEVCO, a delegation of 10 MEPs from the Committees on Development (DEVE) and on the Environment, Public Health and Food Security (ENVI) (see below) and the Committee of the Regions First Vice-President Markku Markkula.

The delegation is composed by:


The European Parliament delegation is composed by:

Traduire
Read also our global organisation's article on the issue.