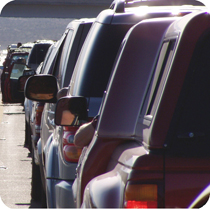 The German Institute of Urban Affairs in co-operation with the Council of European Municipalities and Regions (CEMR) organises a seminar on urban road pricing on 30 September 2008 in Berlin.
The seminar is part of a two-day event.dedicated to the exchange of experience between experts dealing with environment, transport, urban development and finance, and representatives from local and regional government.
The main aim of the day will be to see how European cities such as London, Milan, Amsterdam or Stockholm have developed or plan to develop urban road pricing systems. It will also aim to identify problems encountered by cities while implementing their scheme as well as benefits provided to cities.
This first part will be conducted both in English and German with simultaneous interpreting being offered.
The first day of the seminar, on 29 September 2008, will be dedicated to environmental zones in German cities such as Berlin, Hanover or Cologne. It will assess how German cities have introduced environmental zones for motorised traffic in order to reach the EU thresholds for emissions.
The working language will be German only.