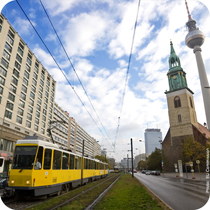 The Council of European Municipalities and Regions (CMER) supports the European Parliament's proposal to draft an Action plan on urban mobility and calls on the Parliament to take into account four priorities.
CEMR asks the European Parliament to confirm that the principles of subsidiarity and local self-government will be fully respected. Measures adopted by the European Union should bring some added-value in mobility policies of European cities and towns and not encroach on local and regional competences.
Financing sustainable mobility implies significant investments for municipalities, cities and regions. CEMR advocates a European incentive policy to support local authorities investing in public transport and developing integrated mobility plans.
The EU would also have a considerable added-value in ensuring an effective gathering and dissemination of data and experiences on sustainable mobility. Many municipalities are well-advanced and their know-how should be shared amongst other local and regional authorities in Europe.

Issues such as freight transport, urban sprawl and the urban-rural interface were not sufficiently addressed in the Green paper on urban mobility. CEMR would like the European Parliament to better include them in its Action plan. It also favours a European integrated approach on urban mobility, with a mainstreaming of this issue into other European policies such as energy efficiency and climate policies.

Background information
On the occasion of its plenary session on 12 January 2009, the European Parliament announced its intention to publish an Action plan on urban mobility, considering the delay of the European Commission to publish such a text (initially scheduled for the autumn 2008). The MEP and rapporteur Gilles Savary stressed that the EP report on a European action plan on urban transport, to be adopted in April 2009, will heavily influence the appointment of the new European Commissioner for transport, following the European election in June.