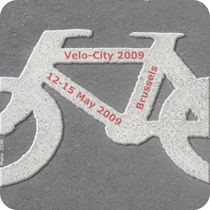 The "re-cycling" of European cities

The Brussels Capital-Region, in cooperation with the European Cyclists' Federation (ECF), is holding Velo-City 2009, the biggest international cycling conference, from 12 to 15 May 2009.
The aim of Velo-city 2009 is to promote the bicycle as a valuable urban means of transport. Particular focus will therefore be given to the "re-cycling of cities".
The four-day event will be organised around several sessions and plenary sessions, excursions to Liège and Ghent, and a permanent exhibition. The highlight of this conference will be the signing of the Charter of Brussels in the European Parliament.
The Charter will include a pledge from the signing European cities to invest in bicycle as part of an urban transport system. Also in the charter these cities call out for concrete initiatives from European institutions to promote the bicycle as a fully-fledged means of urban transport.