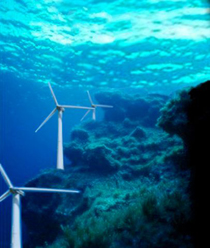 The world's first offshore maritime turbine has been launched off the coast of Devon. In a nutshell, it is about applying the principle of windmills to the tide.
Any coastal commune in Europe keen to find cleaner and reliable power source without scarring their landscape with windmills will probably be interested in this experiment.
The water turbine is a 10 meter long turbine built into the seabed; it can generate 300 kilowatts of electricity. The prototype cost about 4.5 million euros.
Its advantages on conventional windmills seems obvious : first and foremost, unlike the wind, seatide never stops; which makes it extremely reliable.
Besides, because the turbine rests on the seabed, it is invisible and does not take any room on land.
If a turbine needs to be replaced or mended, it is relatively easy to lift it out of the sea and replace it with a spare one.
The manufacturer of the prototype estimates that there is at least 10 gigawatts of power available from tidal power around the UK. This, they claim, is the same as about half of the nuclear industry in Britain.
Note : the picture above is a montage; it does not show the real shape of water turbines.
Link to the manufacturer : http://www.energy.soton.ac.uk/renewables/mct.htm