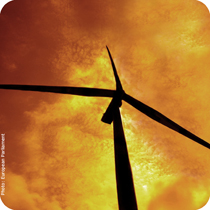 The Council of European Municipalities and Regions (CEMR) welcomes the recognition by both the Council of ministers in charge of environment and the European Parliament's Environment Committee of the crucial role played.by cities, municipalities and regions in the fight against climate change.
In the conclusions of a meeting taking place on 20 and 21 October 2009, the Council of ministers in charge of environment explicitely highlighted the role which local authorities will play in implementing mitigation and adaptation actions and calls for recognition of that role in a Copenhagen agreement.
The European Parliament's Committee on the Environment adopted, on 19 October 2009, a "resolution on the EU strategy for the Copenhagen Conference on climate change (COP15)". It includes an amendment drafted and supported by associations of local authorities* to convince the European institutions to recognise this role in their own position on the international climate negotiations.
The amendment adopted by MEPs is as follows:
'Acknowledging that by 2030 two thirds of humanity will live in urban centres; recognises that cities, local and regional authorities have a crucial role in implementing practical climate actions; welcomes the commitment demonstrated by the World Mayors and Local Governments Climate Protection Agreement, and calls for the EU to promote the engagement of cities, local and regional authorities in the development and implementation of national climate change strategies, including Mitigation Action Plans and Adaptation Programmes of Action."
It refers to the World Mayors and Local Governments Climate Protection Agreement, supported and promoted by the world association of local authorities, UCLG. By signing this agreement, mayors and local governments accept the challenge and responsibility to lead and take action to combat the rapid and dangerous rate of warming of the planet.
The resolution still has to be adopted by all the members of the European Parliament during the November plenary session.
* The associations of local authorities are: United Cities and Local Governments (UCLG), the Council of European Municipalities and Regions (CEMR), Eurocities, Climate Alliance, Energie-Cités, ICLEI-Europe.