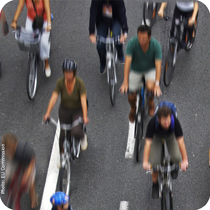 Gent (Belgium), London Borough of Sutton (UK) and Nantes (France) receive the 2009 CITIVAS Awards for sustainable transport, on 20 October in Krakow.
Bicycles are at the heart of Gent's mobility policy, and the city has.proven its dedication to this priority through the creation of a large pedestrian area in the city centre, a student friendly bicycle rental system, and plans to build a garage for more than 10,000 bicycles. These efforts are complemented by a host of public transportation services, namely extended tramlines, segregation of public transport lanes, longer operating hours, free night buses, and free public transport for children under the age of 15.
"Smarter Travel Sutton" is the name of this London Borough's social marketing programme to convince citizens to change their transport habits, and reduce resident car trips. Since 2006, the Sutton Council has actively made contact with every household in the borough (population 185,000) in an attempt to encourage them to complete a "personal travel planning" project. All schools in Sutton have a 'School Travel Plan" and more than 100 Sutton businesses have a Workplace Travel Plan. £5 million were allocated to the campaign.
Nantes Métropole focused on four action areas. The first two actions relate to the bus network: the development of a clean bus fleet (more than 80% of the city's total bus fleet now runs on compressed natural gas) and the design of a new 'Chronobus" quality and performance mark for bus lines within Nantes. Thirdly, Nantes demonstrated dramatic improvement in bicycle use through the construction of secure bike parking spaces, extension of the rent-a-bike service, and experimentation with the use of foldable bicycles in combination with public transport. Finally, the city remodelled city centre roads to favour public transport (for example, tramlines) over private cars.