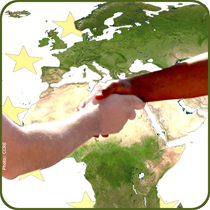 The Euro-Mediterranean Regional and Local Assembly (ARLEM) is born

From the partner countries, representatives of local and regional from the southern and eastern shores of the Mediterranean are appointed by the national governments.

The Assembly is chaired by two co-presidents: Luc Van den Brande, President of the Committee of the Regions (CoR), and Mohamed Boudra, mayor of Al Hoceima (Morocco). The board is composed of the Wali (governor) of Algiers, Mohamed Kebir Addou ; Ivan Jakovcic, governor of the region of Istria (Croatia) ; Michel Delebarre, Mayor of Dunkerque (France) ; Michel Vauzelles, president of the French region of Provence -Alpes-Cote d'Azur ; the mayor of Uszaka (Hungary) and the Mayor of Greater Tafilah (Jordan).
At the inaugural session, the Council of European Municipalities and Regions (CEMR) was represented by its Vice President, Wolfgang Schuster.
The next meeting of ARLEM will be held in Morocco in January 2011.