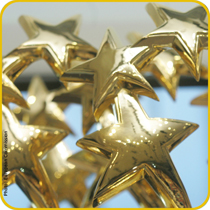 Eight different town twinning, civil society and remembrance projects, funded by the European Commission's 'Europe for citizens" programme in 2009, were awarded the Golden Stars Award at the occasion of the awards ceremony held in Brussels on 17 November 2010.

This year's Golden Stars is the seventeenth edition, the first award having been given in 1993. The projects selected revolve around issues such as making sure that history remains relevant so as not to forget the past and encouraging dialogue. Other issues included sharing experiences between citizens from different member states, bringing young people together across borders, fostering of volunteering and promotion of European values.

'Citizens do not revolve around the EU. The EU revolves around its citizens," declared Commission Vice-President and EU Commissioner for Justice, Fundamental Rights and Citizenship, Viviane Reding during the awards ceremony. 'The future of European integration depends on the participation of citizens and civil society organisations. Our Union can only gain in legitimacy and prosper if it has support at grass roots level. This support is essential in our efforts to build a Europe based on solidarity, respect, human rights and democracy."

Future of 'Europe for citizens" programme
The Commission recently launched a process in preparation of the new 'Europe for citizens" programme for 2014 to 2020.
In this context, the Council of European Municipalities and Regions (CEMR) organised three regional twinning seminars throughout 2010. The results of these seminars will allow CEMR to come up with concrete proposals to be presented in 2011 at its Twinning Congress in Rybnik, Poland. Indeed, CEMR intends to provide the Commission with a White Paper on the future of town twinning at the occasion of the Congress so as to feed into the reflection process launched on the modernisation of the town twinning movement.