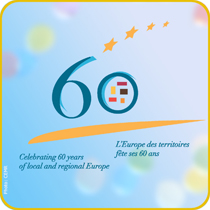 On 28 January 2011 in Geneva, Switzerland, local and regional Europe will celebrate the founding of the European municipal movement what with the 60th anniversary of the Council of European Municipalities and Regions (CEMR).
Events: CEMR to celebrate sixty years
CEMR will kick-off its 60th anniversary year with an event in its founding city, Geneva, to be hosted on 28 January by the City of Geneva in cooperation with CEMR's Swiss section and founding member, the ASCCRE. This first event, organised under the patronage of Valéry Giscard d'Estaing, Emeritus President of CEMR, former President of France and of the European Convention, will aim at reflecting on the accomplishments of the European local and regional movement, which now covers thirty-nine countries. These past achievement will be observed with a forward-looking perspective, so as to help determine the steps to take in the coming years.
Throughout the course of this milestone year in European local and regional history, CEMR and its member associations will undertake a number of initiatives, such as its Twinning Congress to be held in Rybnik, Poland, in September 2011, so as to further develop its progressive strategy. This strategy will contribute to reinforcing the voice of decentralised levels of government at the European level, notably with regards to the Europe 2020 strategy and the strengthening of local democracy across the continent.
CEMR will conclude its 60th anniversary year with an open evening event to be held in Brussels in December 2011 during its Policy Committee meeting. The event will be hosted by CEMR's Belgian member associations (VVSG, UVCW, and AVCB). At this occasion, CEMR will notably unveil its strategy for the coming decade.
Weekly Focus: Zoom-in on local and regional Europe
In the context of local and regional Europe's 60th anniversary, CEMR will launch a year-long initiative starting January 2011 entitled 'Weekly Focus". Each week, one of 39 countries in which CEMR has members will be selected and an article published on CEMR's website showcasing its member association(s) and their activities, local and regional authorities in that country and any interesting initiatives or success stories.
About CEMR: Once upon a time...
The Council of European Municipalities, which later came to encompass regions, was founded in 1951 in the hopes of building a united Europe based on local democracy and autonomy as well as on the participation of citizens.
In the past sixty years, CEMR has actively contributed to the numerous steps of the European construction, notably through developing the principal of 'autonomous self-government" of local and regional levels and through the creation and implementation of a true European regional policy. CEMR also participated in initiatives launched to strengthen the European institutions, including the setting-up of the Congress of Local and Regional Authorities within the Council of Europe and the Committee of the Regions of the EU, as well as the creation of the European Parliament intergroup representing the interests of local and regional authorities.
Today, CEMR is the largest organisation representing local and regional authorities all across Europe. Its members are 53 national associations of towns, municipalities and regions from 39 European countries, which account for some 100 000 local and regional authorities. CEMR constitutes the European regional section of the world organisation United Cities and Local Government (UCLG).
For more information on CEMR, please consult the CEMR Welcome Pack
Should you wish to attend CEMR's 60th anniversay kick-off event in Geneva, please contact Nina Holbrook (e-mail: nina.holbrook [at] ccre.org; telephone : +33 1 44 50 59 59) at CEMR's Secretariat General.