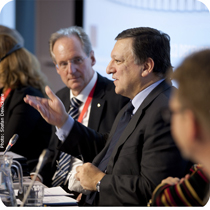 We must show a common political will to act together, decisively and urgently - President Barroso

“The situation today is difficult, we need to confront it, we need more than ever to show a common political will to act together, decisively and urgently,” declared European Commission president, José-Manuel Barroso, on 12 December 2011.in Brussels at the occasion of an event on “governing in partnership”, a new model of European governance, which aims at involving all spheres of government as well as citizens, businesses, civil society and relevant stakeholders.

“We will succeed only if we all share a common vision and also a common direction.  We need for that a real partnership,” he continued.

European commissioner for regional policy, Johannes Hahn, told participants of the importance of putting partnership contracts into practice, inviting all to contribute to the devising of the Commission's ‘code of conduct' in order to better define what these contracts should look like and how national governments could work together with local and regional authorities.

For his part, the president of the Congress of Local and Regional Authorities of the Council of Europe, Keith Whitmore, stated that “the way to overcome the current crisis is through innovation and through greater participation of our citizens in democratic processes and the decision-making process at the grassroots. Increased public participation and direct involvement in local governance will give our citizens a sense of empowerment, and will help to restore confidence and bridge the gap of the democratic deficit.”

Partnership for a successful Europe 2020

The governing in partnership model was notably discussed in respect to the Europe 2020 strategy and future cohesion policy.  In this context, Mercedes Bresso, president of the Committee of the Regions, noted that the strategy is “still hindered by a partnership gap as local and regional authorities have only been consulted but not involved in the conception and implementation of national reform programmes.”

“It is very important for the Commission to get the views from the local and regional authorities on how Europe 2020 is implemented on the ground and on the level of involvement of all stakeholders,” stated Barroso in this regard.  “We need your full commitment but we also need to make sure that you are fully involved. This partnership gap has to be closed.  In fact this is at the core of our modernised cohesion policy: we want to build a closer partnership.  We want to ensure the overall coherence of all our different policies, to link all our common objectives and to guarantee proper ownership by all stakeholders at all the different political levels.”

The event, called "Governing in partnership – United to build a stronger Europe", was organised by the Council of European Municipalities and Regions (CEMR), in collaboration with the other major European networks of local and regional authorities, the Assembly of European Regions (AER), the Conference of Peripheral Maritime Regions (CPMR) and EUROCITIES.