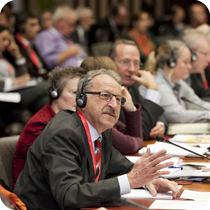 200 local and regional elected representatives and heads of national associations of municipalities and regions from 31 European countries gathered in Brussels on 12 and.13 December 2011 at the occasion of the Council of European Municipalities and Regions (CEMR)'s Policy Committee meeting.

At this occasion, Policy Committee members notably approved CEMR's 2012 work programme, which is to introduce a new, more flexible approach and structure to the Secretariat General's work.  This newly adopted work approach was coupled with the adoption of CEMR's new logo and tagline, which will be mainstreamed in 2012.

A number of debates were held on cohesion policy, the consequences of the crisis on local and regional authorities, and the role of municipalities and regions in the transition towards democracy in the Mediterranean.

Furthermore, the presidents of the three Belgian associations* represented within CEMR within the Union of Belgian Cities and Municipalities, presented local government in Belgium including supra-municipal cooperation, territorial solidarity, urban communities and participative democracy.

The Policy Committee unanimously approved the membership of the Albanian Association of Communes (AAC-AL), presided over by Sabri Sollaku, mayor of Bradashesh, bringing CEMR's membership up to a total of 55 national member associations.  Also, the Faroese Municipal Organisation (FKF), headed by Gunvá Við Keldu, mayor of Klaksvík, was welcomed as an observer to CEMR's work.

Moreover, CEMR welcomed representatives of the National Association of Local Authorities of Georgia (NALA), whose membership was approved by CEMR's Executive Bureau on 28 September 2011 in Warsaw, Poland.  NALA is presided over by Mamuka Abuladze, member of the Rustavi City Council.  Executive director of the Georgian association, David Melua, stated that his association's membership to CEMR consisted in “a symbolic act and further step forward towards European integration”.

Bruno García De León, deputy mayor of Cádiz, presented CEMR's 25th General Assembly, to be held in Cádiz, Spain, from 26 to 28 September 2012 under the title of “Innovating in 3D: Decentralisation – Development – Democracy”.

This edition of the General Assembly is to be more interactive, innovative and dynamic, notably through the use of new technologies and methods of debate.

Giampiero Orsoni, mayor of Venice and president of the Federation AICCRE-Veneto was elected to CEMR's Executive Bureau, as CEMR Vice-President; Eleni Loucaides, member of the Executive Committee of the Union of Cyprus Municipalities and member of Nicosia Municipal Council, was elected vice-president non-member of the Executive Bureau; and Ingrid Štegmannová, head of external relations at the Union of Towns and Communities of the Czech Republic, as honorary auditor.

The Policy Committee meeting was organised in collaboration with the Union of Belgian Cities and Municipalities, in partnership with the Committee of the Regions.