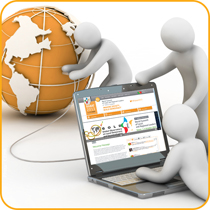 United Cities and Local Governments (UCLG), the worldwide organisation of local government, has launched a website for its 2013 World Summit, to be held from 1 to 4 October in Rabat, Morroco.

The online platform will allow for those unable to make it to the conference to follow all the debates and workshops via live streaming and to participate in an internet-based debate with participants and a wider online public.  The website also includes a live Twitter newsfeed, Facebook feed, the Summit programme as well as registration and practical information.

This year’s edition of the summit will aim at developing a set of concrete proposals to represent municipalities and regions in international negotiations on the post-2015 global agenda for development, the successor of the millennium development goals.  These will also serve to prepare Habitat III, the 3rd UN Conference on Housing and Sustainable Urban Development, to take place in 2016.

The World Summit will also focus on access to basic services; the building of diverse, open and innovative societies; the promotion of tolerance, solidarity and exchange; gender equality; and reinforcing the role of culture in society.

Delegations from over 100 countries around the world are expected to attend, including local and regional elected officials, international organisations, as well as representatives from the public and private sectors, financial institutions and civil society.