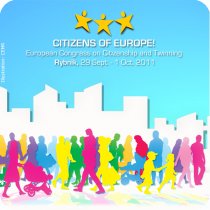 The Council of European Municipalities and Regions (CEMR) is co-organising a European Congress on Citizenship and Twinning, to take place from 29 September to 1 October 2011 in Rybnik, Poland, in order to explore.new forms of partnerships between local and regional authorities as well as discuss the future of the EU 'Europe for citizens" programme.
The Congress is organised in partnership with the Association of Polish Cities, a CEMR member association, and the City of Rybnik, with the financial support of the European Commission and under the patronage of the Polish EU presidency.
How to foster the development of a more 'grassroots democracy"? What does it mean to be European today? How to promote a more diverse and inclusive society at local and European levels? What types of twinning links can help respond to the concrete needs of citizens and municipalities? Such will be among the questions posed and discussed during the Congress.
Consultation --> green paper --> Congress conclusions --> white paper
CEMR has launched a public consultation, whose results will allow CEMR to compile a green paper putting forward recommendations for the future post-2013 European programme 'Europe for citizens". The green paper will be launched at the occasion of the Congress, the deadline for submission of contributions being 20 July 2011.
The green paper and Congress conclusions will then be incorporated into a white paper 'for a new European citizenship", which CEMR plans to present to the European Commission before the end of 2011.