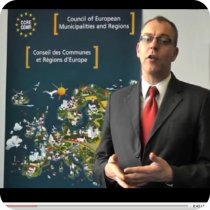 The new secretary general of the Council of European Municipalities and Regions (CEMR), Frédéric Vallier, has taken office on 1 February 2010.
In a video message to CEMR's members, Frédéric Vallier stated that the reflection process about the future of CEMR will be one of his priorities: We operate in a crowded environment. CEMR works alongside other actors who - like us - lobby EU institutions, hold conferences and seminars, and release studies and surveys... What is our precise role and place in that local and regional galaxy? What is CEMR's raison d'être 60 years after its birth? What can we bring you that others cannot? In short what is our specific added value?
He also stated that other priorities include the future of our public services, the impact of the Lisbon Treaty on local and regional governments, the climate issue together with the search for new energy policies and the environment, the future of town twinning, gender equality and decentralised cooperation.
Frédéric Vallier said that he looks forward to working with the support of CEMR president Michael Haüpl, and praised the work of his predecessor Jeremy Smith.
Frédéric Vallier was elected secretary general of CEMR at the policy committee meeting last December for a six year mandate.
The video message is available in English and French.