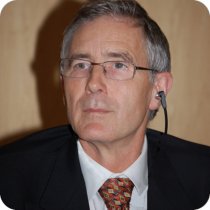 On 31st December 2009, Jeremy Smith ended his 8 year mandate as secretary general of the Council of European Municipalities and Regions (CEMR) - the pan-European umbrella organisation for national associations of local and regional governments.
CEMR President Michael Häupl, Mayor of Vienna, speaking on behalf of CEMR's 38-country membership, paid tribute to Jeremy Smith stating that his really important leadership role on behalf of local and regional authorities across Europe - including his work to make sure that the Treaty of Lisbon, for the first time in the EU's history, recognises local and regional government as key partners in European governance. Valéry Giscard d'Estaing, previous CEMR President, added his appreciation in a personal message to Mr Smith.
As secretary general, Jeremy Smith worked as a public advocate for European local democracy and self-government. He helped to influence a wide range of EU legislation which impacts on local government, and opposed restraints on local democracy and on the freedom of local authorities to decide how to provide public services to their communities. While convinced of the need for an effective democratic European Union to tackle the big issues (like terrorism, energy and climate change), he did not hesitate to criticise the European Commission or Court of Justice when they encroached on the competences of local governments. For example, he campaigned against a number of decisions of the Court which undermined local choice, such as the Coname and Stadt Halle cases in 2005 (involving local authority-owned companies and inter-municipal co-operation); however, he welcomed more recent cases in which the Court changed direction and backed local discretion in public service delivery.
In the last year, the impact of the economic crisis on local government has been his main concern within CEMR, which in November 2009 published a second authoritative survey of local authority associations from across Europe, indicating widespread pessimism about the future financing of local government in the wake of the crisis. Prior to this, he also played a key role in drafting CEMR's European Charter for equality of women and men in local life, now endorsed by almost 1,000 cities ranging from Paris to Vienna and from Reykjavik to Barcelona.
Jeremy Smith said of his retirement from CEMR: It has been a huge privilege to work for Europe's local and regional authorities and their associations for these eight action-packed years. After 14 non-stop years of work in cities across Europe and the world, it is time to change tempo and meet new challenges.
My commitment now is to defend and promote local democracy and public services in the UK and elsewhere. Local government must not be made the scapegoat or victim of a crisis caused by the greed and misdoings of the private financial sector whose nationalised losses have distorted public finances.
Attacking public spending prematurely will only deepen the economic crisis. National, regional and local authorities have a critical role to play in protecting the victims of this crisis, in regenerating local economies, and in helping societies prepare for future threats. I will be using my in-depth experience of European local government to achieve these aims.
Jeremy is succeeded as Secretary General of CEMR by Frédéric Vallier, head of the European service in Nantes Métropole, France who will take office next February.