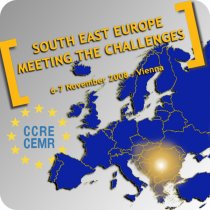 The Council of European Municipalities and Regions (CEMR) is organising a conference on the most concrete issues facing local government in south-east Europe, in Vienna on 6-7 November 2008. The conference is organised in cooperation with the ésterreichischer Städtebund and NALAS (Network of Associations of Local Authorities of South-East Europe).
Around 100 delegates from around over 20 European countries are expected to debate issues such as municipal finances, urban planning, energy and the environment, twinning and the way towards EU membership.
Speakers will include mayors and other local representatives from Bosnia and Herzegovina, Moldova, Serbia, Romania, Kosovo, Bulgaria, Albania, the Ukraine, Montenegro, the Former Yugoslav Republic of Macedonia...
Speakers from elsewhere in Europe will include:
- Michael Häupl, President of CEMR and mayor of Vienna
- Hannes Swoboda, Vice chair of the European Parliament's delegation for relations with south-east Europe
- Tarzan Milosevic, president of NALAS
- Jos Chabert, Chair of the CoR working group on the Western Balkans
- Antonella Cagnolati, Director of the Congress of Local and Regional Authorities of the Council of Europe
The Council of European Municipalities and Regions organised its first conference on local government in South East Europe in October 2005, in Vienna. Since then, it has increased its cooperation with NALAS and CEMR's members in the Balkans.Strengthening relations with local authorities in south-east Europe is also one of the objectives in CEMR's work programme for 2008.
The programme of CEMR's conference on south east Europe