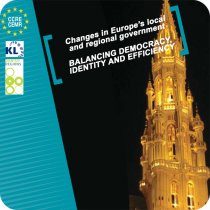 What local and regional structures in Europe? (Copenhagen 01.10.08)

Trying to assess the best structures for local and regional government in Europe leads back to ask what is the role of local and regional authorities in the early 21st century. This was the main conclusion of the seminar on the reforms.in Europe's local and regional structures organised by the Council of European Municipalities and Regions (CEMR) with the support of Local Government Denmark and Danish Regions in Copenhagen on 1 October 2008.

Chief Executive Officer of Local Government Denmark, Peter Gorm Hansen posed the question: Are we merely a service provider? Are we there solely to ensure social inclusion, has our role become limited to provide overall strategic guidance?

Kristian Heunicke, of the association of Danish Regions went one step further: Though Denmark has reduced the number of its regions (from 14 counties to 5 regions), the real issue is the raison d'être of the regions: We must accept that the existence of the regions in Denmark will be continuously raised for decades to come.

In the course of the seminar, it became obvious that one overriding trend emerges across Europe: Local authorities are under increasing financial and demographic pressure to provide more services in a more cost effective way, and simultaneously central governments are seeking to intervene in an increasingly top-down manner.

Denmark illustrates the new situation, having recently (2007) gone through a substantial reform focusing on merging municipalities (from 239 municipalities down to 98). Though the reform process somewhat strengthened local government, explained Peter Gorm Hansen, it was too much a top-down process with central government putting too much emphasis on efficiency. In the end, local democracy was completely forgotten in the reform; and the parliament is free to interfere far too much in purely local issues which are not its business!

In the quest for concealing efficiency, democracy and identity, the dilemma is firmly on the choice between merging municipalities or not. Two examples illustrate the two options: France and the United Kingdom. With a similar population (over 60 million), France has around 36,000 municipalities and the UK only 450!

France has opted for a strong local identity with citizens having a sense of belonging to and feeling more involved in their commune. However, this fragmentation often forces France's communes to engage in inter communal arrangements (covering 98% of French territory these days!) in order to pool their resources into joint investments. This achieves a balance between efficiency and identity but often at the expense of democracy since the chair and members of these inter-communal bodies are elected indirectly (by elected politicians of the territory, not by the inhabitants). And yet, explained Olivier Audibert-Troin, Chair of the Communauté d'agglomération dracénoise, 80% of the French voted at the last local elections!

The United Kingdom has opted for much fewer but bigger local authorities to increase their efficiency. However, asked deputy chief executive of the UK's Local Government Association John Ransford, how to make sure that the smaller towns contained in these large entities are taken into account, and how can their inhabitants identify with the larger municipality when the name of their original smaller town does not exist anymore? Also, there is excessive central control with, until recently, over 1,000 indicators laid down to assess the efficiency of our local authorities!

Half-way between France and the United Kingdom, Finland has opted for a reform favouring both mergers and inter-municipal cooperation: local authorities may merge on a voluntary basis and get subsidies from the central government, while on a number of issues, partnership is compulsory for municipalities of less than 20,000 inhabitants.

"Financial discretion is a prerequisite!"

Participants agreed that beyond the debate about merging or cooperation or the extent of central government control, the financial factor cannot be left out of the equation. In some countries (the UK for instance), 75% or more of local authorities' incomes comes directly from the central government. This leaves some of Europe's towns with too small a financial margin to be in a position to address their specific citizens' needs as they wish to, said CEMR secretary general Jeremy Smith. Of course, nobody argues for a 100% financial autonomy for our local governments, part of their revenues has to come from central government, which in turns means that a measure of control from the central government is legitimate. However, as already stated in CEMR's Charter of municipal liberties adopted in 1953: "Municipalities have the right to create their own resources, by voting local taxes to meet the needs and priorities of their inhabitants".

The conclusions of the seminar were that though there is no single 'one size fits all" model of local and regional architecture, general trends are visible: in every European country, local governments are under increasing pressure for efficiency, with as a corollary increasing control measures from central governments. Most countries feel that the quest for ever greater efficiency has been at the expense of local democracy. This trend is also perceptible when it comes to the relations between our towns and the EU: more and more, the EU institutions are seeking to regulate inter communal arrangements arguing that these may distort the Internal Market. However, this view has been detrimental to partnership between smaller municipalities on issues that are purely local and therefore would have a very limited impact on the Internal Market.

The Copenhagen seminar brought together around 100 participants from over 20 countries. In the coming weeks, the Council of European Municipalities and Regions will produce a publication summarizing the main themes of the seminar. The reforms of local and regional structures in Europe will then be the topic of one of the sessions of CEMR's general assembly in Malmö in April 2009.
The Powerpoint presentations (in their original language)
Pictures taken at the seminar
The full programme of the Copenhagen seminar