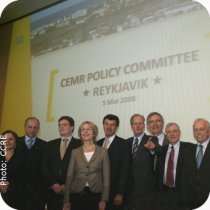 The Policy Committee of the Council of European Municipalities and Regions (CEMR) met in Reykjavik on 5 Mayl 2008.
After a debate, the members of the Policy Committee have adopted CEMR's position on the draft charter of regional policy of the Congress of the Council of Europe. A number of amendments were adopted including the fact that one of the charter's aims is to support and strengthen local self-government. Members also called for the charter to avoid any hierarchisation when referring to local, regional and national authorities
Local democracy in the Balkans: CEMR welcomes Bosnia
The Policy Committee approved the application for CEMR membership from the two local associations of Bosnia and Herzegovina.
The Association of municipalities and cities of Bosnia and Herzegovina was founded in 2002. It represents 80 municipalities and cities corresponding to 99% of the local authorities in the Federation.
The Association of municipalities and towns of Republic Srpska (Bosnia and Herzegovina) was created in 1998. Its members represent 63 "local self-government units", corresponding to 100%of the total of the number of local authorities of the Republic.
CEMR's members are now 51 (national associations of local or regional authorities) covering 37 European countries. In the coming months, CEMR will organize a number of events focusing on the Balkans, including a conference on South-East Europe, in Vienna in November 2008.
New CEMR nominations
CEMR Policy Committee approved the nomination of Janusz Marszalek as chair of its Twinning working group. Janusz Marszalek is the mayor of Oswiecim (Poland). The Auschwitz-Birkenau concentration camp is on the territory of Oswiecim; however, its mayor stresses that the presence of the concentration camp has encouraged the municipality in being active in the fields of dialogue, exchanges and peace... which are also the values of town twinning.
Finally the Policy Committee approved the nomination of Pedro Castro Vàsquez mayor of Getafe and president of the Spanish federation of municipalities and provinces (FEMP) as CEMR's vice-president.
The Policy Committee meeting was organised with the support of the Association of local authorities in Iceland and Reykjavik municipality. The president of the association of local authorities in Iceland, Halldor Halldorsson opened the meeting and took part in the debates. The meeting was chaired by CEMR's first vice president and president of the Swedish association of local and regional authorities, Anders Knape.
Pictures of the event
The local level in Iceland (drafted by the association of local authorities in Iceland and the municipality of Mosfellsbaer).
Translate