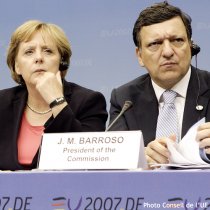 The President of the Council of European Municipalities and Regions (CEMR) and mayor of Vienna, Michael Häupl, has given a cautious welcome to the outcome of the Brussels European Council (21-22 June 2007).
I welcome the fact that an agreement was found and that an intergovernmental conference (IGC) will be convened to take the European Union forward, says Michael Häupl. However, the decision to simply amend the two previous treaties rather than drawing up a single treaty will leave us with a complex legal framework. The original aim of creating for our citizens a clear and unified text on how Europe works has, I regret, been lost.
Michael Häupl welcomes a number of specific points for which CEMR has strongly campaigned on behalf of local and regional government: We are relieved to see that the future treaty will keep the recognition of local and regional self-government; this is all the more important since some 70% of EU legislation is implemented in our municipalities and regions.
We welcome in particular the decision to add a new provision on public services, which emphasizes the essential role and the wide discretion of national, regional and local authorities in providing, commissioning and organizing services of general economic interest as closely as possible to the needs of the users. The Commission and Court of Justice have in recent years tended to trespass upon this wide discretion, so it is good to see the heads of state and government make a clear and positive statement on this key issue.
CEMR's president welcomes the strong emphasis on subsidiarity and early consultation, however he expresses concern that the European Council appears to have left out one important point in the constitutional treaty: the explicit extension of the definition of the principle of subsidiarity to include local and regional levels of government: No government had objected to this provision, so we hope the future treaty will include this wider definition of the principle of subsidiarity.

Finally, Michael Häupl welcomes the European Council's statement on the need to reinforce communication with the European citizens: For the European Union to improve its communication with its citizens, it needs to work closer with Europe's local and regional levels, be it local and regional elected representatives or associations. As the Council noted, this will be particularly important during the upcoming IGC and ratification process. Europe needs a partnership between all the spheres of government in order to be better understood and better accepted by its citizens.