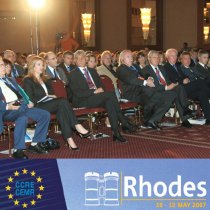 The European Commission and CEMR jointly launch "Europe for the citizens"

The new -Europe for Citizens' programme has been launched simultaneously in Brussels and Rhodes, on 10 May 2007. EU Commissioner in charge of Education, Training and Youth, Jan Figel spoke from Brussels by videolink to the 600 delegates at the Council of European Municipalities and Regions' (CEMR) conference 'Twinning for tomorrow's world", in Rhodes.
For the past half century, European integration has affected mostly markets and institutions. I believe that in the next half century a new balance should be found. We must bring the process of integration to the people, said Jan Figel. The European Union is a community upholding the values of respect, tolerance, solidarity, non-discrimination, freedom of speech and the rule of law. These values bind Europeans together and give them a sense of shared identity. Europe is a state of mind.
The chair of CEMR's working group on town twinning, Anders Knape, replied to Jan Figel on behalf of the participants to the conference on town twinning: We, at CEMR, are pleased at the spirit of cooperation that has developed with the European Commission. We hope that this will remain the case in future, and that we will contribute to making this programme an efficient tool for twinning and European citizenship.
Anders Knape explained to the audience in Brussels the aims of the Rhodes conference: We are here to exchange our experience and views on how twinning can help to address the challenges Europe faces. Twinning can contribute to building a more inclusive society where everyone has their place; twinning can encourage young people to be more involved in public life; twinning can strengthen economic cooperation and contribute to a more sustainable Europe.
The Mayor of Rhodes, Hatzis Hatziefthimiou told the conference that We must do our utmost to ensure this programme does not benefit only local leaders: the success of it will depend on the durable involvement of our citizens, since, as the name of the programme says it plainly, this is a programme for our citizens. We will promote the values of town twinning in order to make all the democracies who have peace at heart part of this programme. And I address this wishmore specifically to the representatives of Cyprus, Israel and the local authorities who are with us here in Rhodes.
We started preparing this conference with CEMR in the wake of the 'No" vote on the EU Constitutional Treaty in France and the Netherlands, said the Vice President of the Greek Central Union of Municipalities and Communities (KEDKE), Georgios Giannopoulos. It reinforced our conviction that local governments have a crucial role to play to bring together the citizens from the whole of Europe, to let them see how much they have in common. Town twinning is the only way to achieve this goal. We are building a jig-saw to make our dream come true: a free and united Europe for all our citizens.
The President of the Council of European Municipalities and Regions, and mayor and governor of Vienna, Michael Haupl, recalled that Europe's citizens do not fully grasp the importance of the EU: There is also a lack of trust in the European institutions. Add to this the rise of nationalism here and there in Europe, and you will agree that we have reasons for concern. This is why town twinning is such an important tool: Twinning helps overcome the hurdles of mistrust, it also helps European integration to be developed from its grassroots.
Pierre Mairesse, Director at the DG Education and Culture of the European Commission then explained to the participants in what way the new programme will affect them and their town twinning plans: Europe for citizens is now alive; it gives town twinning continuity and budgetary stability for the next 7 years. It also shows that we recognize the contribution of town twinning to active European citizenship; town twinning makes the European public space a reality at local level.
'Europe for citizens"
The "Europe for citizens" programme was adopted by the European institutions on 12 December 2006 and will end in December 2013. Its main objectives are to promote citizens' participation, develop a sense of European identity, develop citizens' ownership of the EU, and to promote tolerance and mutual understanding.

'Europe for citizens" supports four main types of actions:
Action 1 - Active Citizens for Europe
involving citizens either through activities linked to town-twinning or through other kinds of citizens' projects.

Action 2 - Active civil society in Europe
targeted to civil society organisations either through structural support on the basis of their European level work programme or through support to projects.

Action 3 - Together for Europe

Action 4 - Active European Remembrance
support to projects aiming at preserving the sites and archives associated with de deportations as well as the commemorating of victims of Nazism and Stalinism.
The "Twinning for tomorrow's world" conference is organised at the invitation of the Rhodes municipality and the Central Union of Municipalities and Communities of Greece (KEDKE), with the support of the DG Education and culture of the European Commission.
The new programme "Europe for citizens"