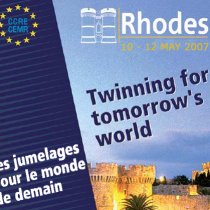 CEMR conference "Twinning for tomorrow's world" (Rhodes, 10-12 May 2007) closed with the adoption of a common declaration. The 600 delegates at the conference state in it their commitment to ensure that twinnings are instruments for the inclusion of all the citizens and their cultures.
We emphasise, says the declaration, that twinnings can play a particular role in relations with countries that are potential candidates for the accession to the European Union, but also with all of our Union's neighbouring countries. Indeed, the declaration highlights the importance of twinnings with municipalities from non EU Member States: Twinnings can and must help build bridges between towns and communities around the Mediterranean, and serve as instruments for reconciliation and foundations for peace in the region... Moreover, twinnings can contribute to policies for development cooperation , and help achieve the Millenium Development Goals.
The Rhodes declaration also reaffirms to the European institutions the value of a strong financial and "programmatic" commitment from the Union. Such commitment should take into account the involvement of all types of local authorities. With this view, the participants to the Rhodes conference call on the Council of European Municipalities and Regions (CEMR) to play a role as interface and coordinator between local governments and the European Institutions.
Lastly, the declaration states that twinnings can help deepening the dialogue and debate concerning the adoption of a treaty in relation to the fundamental principles on which the European Union must be based, to its institutions, to the fundamental rights of the citizens and to European citizenship.
The Rhodes declaration on twinning for tomorrow's world
Last words...
CEMR Executive President and Member of the European Parliament, Oldrich Vlasak, chaired, on 12 May, the session on strategies and tools for tomorrow's twinning. The "Europe for citizens" programme aims to build a Europe close to the interests and needs of its citizens, he said. It is therefore obvious that twinning contribute to bring Europe closer to its citizens' realities by making them the actors at the centre of the European construction process.
CEMR president Michael Häupl paid tribute to Nicole Fontaine's work: Ms. Fontaine's report to the European Parliament in 1988, called, for the very first time, on the European institutions to help fund twinning in Europe. Without that report, many twinnings would not have been possible.
It was revolutionnary indeed, replied Nicole Fontaine. I faced scepticism at the time; whereas today there is a heavy ambiguity as to the finality of the European construction. Do we want a Europe that limits itself to a wide market as much open as possible to competition, and in which the rule of the strongest prevails, or do we want a Europe of solidarity that would keep her identity based on shared values? How can we remedy to this "unlove" from citizens towards Europe? I believe CEMR has a pivotal role to play. You, at CEMR, have an essential mission to help our people recover the European dream. However, CEMR cannot do this alone. The "Europe for citizens" programme will play a role too, provided it benefits from a budget that reflects the importance of the challenge. Equally important, whatever will succeeds to the Constitutional Treaty will have to include the progress gained by local and regional authorities: the aknowledgement of your role, the future of public services, the notion of territorial cohesion...
The Director General of the European Commission's DG Education and Culture, Odile Quintin, highlighted the need to open twinning to all municipalities, including small towns. Twinnings have adequately addressed today's social and political challenges by offering creative and efficient solutions, she said. Twinning contributes to society's dynamism by promoting innovation and creativity through exchanges of experience; they encourage our citizens to learn other languages, and help small businesses meet foreign partners.
Other speakers at the closing ceremony included Serge Laborderie who presented "The Europe school", created within the twinning between the municipalities of Saint-Alban (France) and Salgareda in Italy.
The president of the association of Romanian communes, Emil Draghici, and his counterpart of the Permanent conference of cities and municipalities and Serbia, Zeljko Ozegovic, both explained the importance of twinning in their countries.
Twinning for development and peace in the world
Jordi Llopart, representing the United Nations' campaign for the Millennium Development Goals, told delegates how important the role of local government and twinning is to meet these objectives,.
For her part, the secretary general of the world association United Cities and Local Government, Elisabeth Gateau, told the conference about the forthcoming first annual report on local democracy in the world, and the president of the Council of Europe's Congress of Local and Regional Authorities, Halvdan Skard, highlighted the importance of twinning for the Council of Europe: We are currently debating the ways to tackle human trafficking, and we have reached the conclusion that twinning is one of the tools to use. By the same token, twinning are a tool for cities diplomacy, especially in conflict zones; twinning can help bring peace.
Throughout the Rhodes conference, CEMR held a twinning market. Hundreds of representatives from municipalities had the opportunity to post an "ad" displaying the profile and details of their towns in order to find twinning partners.
All the speeches and contributions