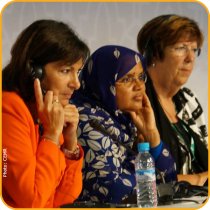 Renewal of UCLG governing bodies at 4th Congress in Rabat

CEMR is happy to announce the election of the president of our French association AFCCRE and Mayor of Bordeaux Alain Juppé and Anne Hidalgo, First Deputy Mayor of Paris, to the co-presidency of United Cities and Local Governments (UCLG) for the 2013-2016 terms. Kadir Topbaş, mayor of Istanbul, was re-elected president of UCLG for another three years.

The full renewal of UCLG governing bodies took place during its 4th Congress in Rabat (Morocco) from 1 to 4 October 2013, which ratified the nomination of over one hundred European elected representatives in the World Council and Executive Bureau.

What was also the II World Summit of Local and Regional Leaders gathered some 3,000 participants around the theme “Imagine Society, Build Democracy” to discuss solutions for wellbeing, solidarity, governance and diversity in our territories.

The CEMR political leadership pleaded for smarter cities, innovative solutions for greater citizen participation, and a stronger representative of women in local and regional governance, among others. CEMR Secretary General Frédéric Vallier introduced the European Charter for Equality of Women and Men in Local Life as a tool to fight inequalities.

The III Report of the Global Observatory on Local Democracy, which illustrated the key role of local authorities in the provision of basic services, was officially launched in Rabat. CEMR coordinated its European Chapter, which will be further presented at our Policy Committee in December 2013.

Rabat Declaration: Towards the Agenda of Towns, Cities and Regions of the XXI Century

European mayors and representatives of towns, cities, local and regional governments gathered with colleagues from all over the world to lay the first steps towards the setting of an Agenda of Towns, Cities and Regions of the XXI Century. They adopted a Declaration that requests full participation of local government in all significant processes of international decision-making, in particular the definition of post-2015 sustainable development goals, the 2015 Climate Conference in Paris and the 2016 UN Habitat Conference. These three events will guide sustainable development, climate and urban policies in the coming decades.