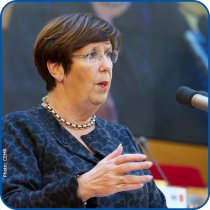 Annemarie Jorritsma-Lebbink was elected President of the Council of European Municipalities and Regions (CEMR) on 2 December 2013 at the occasion of the CEMR Policy Committee in Prague (Czech Republic).

Ms. Jorritsma, also Mayor of Almere (Netherlands) and President of our national Association of Netherlands Municipalities, VNG, was elected unanimously for a mandate of three years. The first woman at the head of CEMR, she wishes to strengthen coordination with other European bodies of local and regional authorities: “We can influence the European Commission, the European Parliament and the Council of the European Union. However, we cannot do it from our side alone. We must collaborate with other organisations such as the Committee of the Regions and the Congress of Local and Regional Authorities in order to avoid any overlap or duplication, and to further strengthen our networks.”

The new president, who succeeds former mayor of Stuttgart, Wolfgang Schuster, has had a long political career, having held the positions of Deputy Prime Minister of Netherlands and Minister of Economic Affairs (1998-2002).

In addition, CEMR has renewed its Policy Committee. With respect to its new rules on equality between men and women, 44% of elected members are women and 56% are men.

The new president is joined by two new co-presidents:

The Policy Committee also elected the following members to the Executive Bureau: