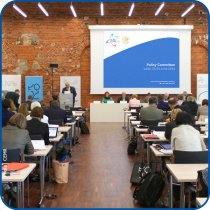 Local and regional elected representatives and heads of national associations of municipalities and regions from all over Europe gathered in Łódź (Poland), on 23-24 June 2014, at the occasion of the meeting of the Policy Committee - CEMR's main governing body.

At this occasion, Policy Committee members notably approved a Declaration on local and municipal authorities to register in the Transparency Register. The declaration expresses CEMR and its member associations' concerns about the fact that the European institutions put local and municipal authorities and their representative associations in the same category as any company with commercial interests or single-issue organisations without any democratic legitimacy.

CEMR's Policy Committee members also approved two positions papers: one on CEMR's response to the Commission’s Consultation on the state aid, and the other one on the Consultation on review of VAT and tax exemptions on public bodies.

On another note, delegates approved the membership request from the Association of Urban Municipalities of Slovenia, as well as the election of a new vice-president - Ms Fatma Şahin, mayor of Gaziantep (Turkey).

Finally, several sessions and discussions took place, including on the 10th anniversary of the biggest EU enlargement, the urban Agenda, and the adaptation of public services to the changing environment.