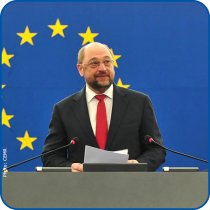 A biography of Martin Schulz: from Würselen local council to the European Parliament

Martin Schulz was re-elected President of the European Parliament, at the occasion of the plenary session taking place in Strasbourg, on 1 July 2014. An opportunity to go back over his impressive professional journey and to learn more about his local background.

Martin Schulz was born on 20 December 1955 and grew up in Hehlrath Germany, close to the German-Dutch-Belgian borders. After high school he decided to try to make a living out of his passion for books and he did an apprenticeship as a bookseller. In 1982 he opened his own bookstore in Würselen, which he successfully ran for 12 years.

Joining the Social Democratic Party of Germany at the age of 19, he started out his political career. In 1984, he was elected to the Würselen Municipal Council, remaining a member for just over two electoral terms, to 1998, from 1987 onwards as mayor. Aged 31, he was elected as the youngest mayor of North Rhine-Westphalia.

In an interview with AFP, taken up by L’Express, shortly before the European elections, Martin Schulz stressed the importance of compliance with the principle of subsidiarity: "The question is: what is undertaken at EU level that could be achieved in a more effective way at the local, regional or national level? (...) The EU should create a framework and set objectives. (...) Local government are those who know full well how to deal with issues" said former mayor Würselen.

More information on Martin Schulz and his election are available on the European Parliament's website.