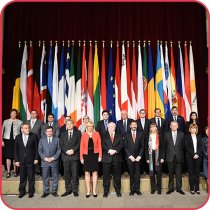 This call was made today in Vienna during a meeting with Commissioner for regional policy, Corina Crețu, to discuss on strengthening the urban dimension of EU policies and on the importance of multi-level governance. The meeting was held on the initiative of the Mayor of Vienna and former CEMR President, Michael Häupl, and counts with the participation of CEMR president, Annemarie Jorritsma, and CEMR secretary general, Frédéric Vallier.

Today EU policies shape our daily lives: about 60% of the decisions taken by local government are somehow influenced by the EU legislation. Besides, all crucial decisions and actions to improve our citizens’ wellbeing are taken within the cities: fighting social inequalities, boosting sustainable economic growth or tackling climate change. In this context, the EU cannot keep local government away from the EU decision-making. This is why, “the setting-up of an Urban Agenda for the EU is one of the major policy challenges of the years to come,” said Commissioner Creţu during her speech.

CEMR supports an EU urban agenda. As stated by Ms. Jorritsma in Vienna:  "An Urban Agenda for the EU is desirable, but that it should respect the specificities and diversity of our local and regional governments. Initiatives and funds should not only reach capital cities, but should extend to all kinds of urban centres, irrespective of their size. This is key if we want to ensure economic, social and territorial cohesion in Europe."  Moreover, an urban agenda should take into account the interdependencies of cities and their surroundings.

The participants of the event signed the declaration “A strong voice in Europe” gathering a set of ten proposals to strengthen cities participation within EU legislation. Among other suggestions, the declaration calls for the right for local elected political representatives to speak within EU official meetings, like EP hearings, to ensure that cities interests are heard. “Given that some cities and regions in the EU have already granted MEPs the right to speak in their municipal or regional elected assemblies, the Rules of Procedure of the European Parliament should equally include a right to speak for elected political representatives of cities, their associations and networks,” states the declaration.