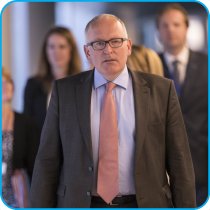 We welcome the European Commission communication “Better Regulation for Better Results”, announced yesterday by Commission First Vice-President Frans Timmermans. The document highlights the Commission’s ambition for a more open, thorough and transparent decision-making process that respects the principle of subsidiarity and better takes account of the impact of legislation.

"CEMR acknowledges the Commission’s aspirations for greater clarity in its decision-making", says CEMR Executive Director European Affairs, Angelika Poth-Mögele.  "However, beyond, SMEs, citizens and stakeholders, local and regional governments need to play a more preeminent role, as 60% of their legislation is directly or indirectly influenced by EU legislation." Given the formal recognition of the role of local and regional governments in the Treaty of Lisbon, “we remain firmly opposed to democratically elected representatives being forced to register on the EU’s Transparency Register when addressing the EU institutions via their national or pan-European associations,” stressed Ms. Poth-Mögele.

“We welcome too the proposals for greater transparency in decision-making as deals on relevant questions are often concluded without public debate, without taking full account of the impacts that result from compromise amendments”, continued Ms. Poth-Mögele. CEMR will make a constructive and on-going contribution to these discussions so as to achieve a decision making process that involves the local and regional perspective at all stages of policy development and implementation.

Although the Commission’s communication recognises the necessity to take into account all levels of governance - local, regional and national - for a better regulatory framework, it is regrettable that the multi-actor governance principle model has been omitted from the overall document. We hope that the creation of a new tool-box to open up and carry out more thorough consultations both for primary and secondary on EU legislation, and to carry out better impact assessments and fitness checks for new and existing legislation to cover the entire policy cycle.

In this respect, despite we supports the conclusion that “at all levels - local, regional, national and European - those affected by law understand best the impact those rules have and can provide the evidence needed to make them better“, as well as the necessity to avoid “gold plating”; we believe that improved partnership working that takes into account the views of local and regional governments for the sake of better regulation can still be achieved.

Despite its direct impact on citizens’ daily lives, EU legislation is too often difficult to apply by municipalities and regions, due to emerging costs or administrative burdens of implementing EU directives. Therefore, we believe that the creation of a REFIT stakeholder platform is a positive development. Nevertheless, we call on the Commission to include representatives of national and pan-European associations of local and regional governments in the platform. They have the technical expertise and the ability to provide rigorous input regarding the territorial impact of EU legislation, when carrying out impact assessments.

Currently, the EU policy cycle is an opaque process making it hard for local government to effectively be involved. Although the Reinforced Scrutiny Board and the new integrated guidelines on Better Regulation advances efforts to implicate local government in the EU decision-making process, we regret that the Commission has not included a more thorough explanation of the territorial dimension of impact assessments and consultations. This principle will ensure that municipalities, regions and their representatives are properly consulted at a very early stage in the impact assessment process.