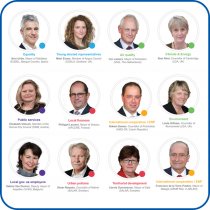 CEMR on Friday 26 June appointed 13 new spokespersons to convey views on matters of concern to European local and regional governments.

The newly appointed spokespersons are expected to hold central responsibility in CEMR's activities. As elected representatives, they will be the face and voice of European local and regional governments, relaying CEMR's concerns and views to the European institutions and worldwide. The appointments were unanimously approved by CEMR's Policy Committee members meeting in Munich, on 25 and 26 June 2015.