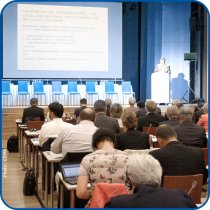 The members of CEMR's Policy Committee met in Munich, on 25 and 26 June 2015. High on the agenda were the renewal of the secretary general's mandate, the appointement of spokespersons and CEMR's 2016 congress taking place in Nicosia.

The following is a summary of some of the conclusions:

Political exchanges also took place at the opening and closing of the meeting, one on "migration to integration – the local and regional path towards an inclusive continent”, and the other “Towards a new European Neighbourhood Policy – what opportunities for local & regional governments from Eastern Partnership countries”.

Earlier in the day, European Commission special adviser for Better regulation, Edmund Stoiber, was invited to CEMR's Executive Bureau to present its views on two key issues for local government: the 'better regulation' package and the EU lobby register. Speaking about overregulation at the European level, Edmund Stoiber said: "We set up a regulatory control committee to provide opinion and advice on the draft European legislation. This committee, which is composed of 6 experts, should include a representative from local government."

The Policy Committee and the Executive Bureau meetings were organised at the invitation of deputy mayor of Munich, Josef Schmid.