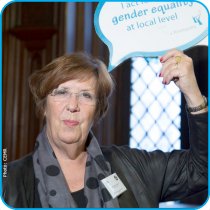 Final conference: 'We must continue to walk our talk'

"We, as representatives of local and regional governments, European institutions and organisations working at European level, must ensure that we keep gender equality on top of our political agendas": said CEMR president, Annemarie Jorritsma, at the occasion of the final conference of the Pilot project, on 14 October 2016, in Brussels City Hall.

"Many cities and regions within our network are already walking their talk to advance gender equality. The lesson now drawn from this is that we need support, guidance, coordination, further awareness-raising, sharing experience and monitoring at European level in order to ensure continuity and real progress in this work. Otherwise there is a risk that these initiatives will slow down or even disappear. I truly believe that the Charter and its indicators will be effective instruments to concretely implement gender equality at local level and especially to ensure that initiatives are sustainable."

The event brought together 160 participants from 20 countries. Among the participants were representatives from local and regional governments, EU institutions and organisations working on gender equality and women rights issues.

The conference was hosted by the City of Brussels on initiative of Mohamed Ouriaghli, Deputy Mayor in charge of Equal opportunities.

CEMRs President Annemarie Jorritsma, Member of the European Parliament Maria Noichl and Mayor of Galdakao and Spokesperson for the CEMR Standing Committee for Equality Ibon Uribe, were three of the speakers who opened the conference. They underlined the important role of local and regional governments in advancing gender equality.

Thérèse Murphy, Head of Operations at the European Institute for Gender Equality (EIGE) presented the work of EIGE in collecting data on inequalities and providing support for policy-makers in the EU.

On occasion of the conference, the results of the Pilot Project were presented and a new section on the Observatory website (www.charter-equality.eu) presenting toolkit and the indicators was officially launched.

Traduire
The photo albums of the final conference: