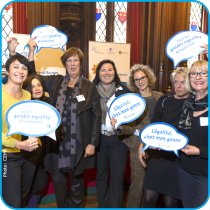 Local elected representatives talk about their work on gender equality

Today, nearly 1500 towns and regions from 32 European countries are already walking their talk to advance gender equality in their communities, for instance, by promoting gender diversity in municipal professions, like bus drivers, or by offering training programmes in schools to prevent gender-based stereotypes.

To support such commitment, the Observatory on the European Charter for equality of women and men in local life (the Observatory) launched a toolkit to support these local government to plan, monitor and evaluate gender equality policies. With a set of 76 indicators (covering areas like employment or decision-making process) the new tool will make it easier to identify needs on the ground and to set up suitable projects.

The presentation of the toolkit took place during a conference that gathered local elected representatives, experts and European politicians. This is what they say about the toolkit and their work in gender equality:

“In my daily work as Mayor I see that there is a lack of knowledge, especially among local elected representatives. Without proper knowledge, it is difficult to mobilise political engagement for a real implementation of gender equality policies. We, as elected representatives therefore have a responsibility to stay informed of what gender equality really is about and make sure to put this on the top of our political agendas. I strongly believe that the Charter and its tools constitute an essential support to raise awareness on what it means to work on gender equality at local level.”

“As local politicians we have a dual role to promote gender equality both in our role as employers and towards citizens, also in areas that might not be so obvious. Public procurement is such an example, it remains a rather unexplored area of the Charter but can have huge impacts in terms of advancing gender equality. In our City, Suresnes, we have started to implement clauses in public contracts to promote gender equality. I believe it is important to share these type of experience and am happy that the Observatory and its website www.charter-equality.eu provides us with such an opportunity.”

“Thanks to the indicators developed we are now able to measure progress of gender equality in our own towns. The indicators and its toolkit has made the European Charter for Equality more complete and useful and is a big step forward. However, to concretely advance gender equality at local level there is a need for active support from European institutions, CEMR and member associations at national level. Signatories also need to take the responsibility and get engaged. Let’s work together to make our town/region the town of gender equality!“

You can read the rest of quotes on the website of the Observator.

The toolkit and the indicators were developed in the framework of a 2-year project funded by the European Commission. The results of the project were presented at a final conference organised at the City Hall of Brussels on the 14 October 2015. This project was carried out in collaboration with the project partners ICF International and the Basque University (Spain).

The photo albums of the final conference: