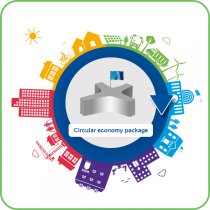 The European Commission published its long awaited Circular Economy package on 2 December. Here we take a look at what the new package looks like, what CEMR thinks about it, how it will be financially supported and what are the next steps.

What is the package all about?

The revision of the waste legislative framework is the backbone of the European Commission’s package. In December 2014, the Commission decided to withdraw a pending legislative proposal on waste, as part of the political discontinuity exercise carried out for the first Work Programme of the Juncker Commission.

The new proposals cover the full lifecycle of products: from production and consumption to waste management and the market for secondary raw materials. It consists of a Communication ‘closing the loop – an EU action plan for the Circular Economy’, an annex listing the different actions planned and the corresponding timetable, and four directives, amending the existing directives on: waste; packaging waste; landfill; and electrical and electronic waste.

What does CEMR think about it?

CEMR is pleased to see that most of our key issues that we addressed in relation to the Commission’s previous proposal of 2014, have been taken into account in the new proposal for a revised waste directive.

How will it be financed?

The transition to a more circular economy will be supported financially by ESIF funding, €650 million from Horizon 2020 (the EU funding programme for research and innovation), €5.5 billion from structural funds for waste management, and investments in the circular economy at national level.