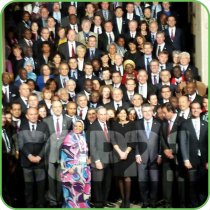 Who could have imagined in 1997 - first negotiations lead by UN member states against global warming - that hundreds of mayors worldwide would be the first in achieving an agreement to reduce greenhouse gas emissions?

That happened on 4 December, on the margins of the Paris Climate Conference - COP21, when cities and regions’ leaders from five continents were invited by the Mayor of Paris, Anne Hidalgo, and the former Mayor of New York, Michael Bloomberg, to take part in the Climate Summit for Local Leaders.

What was the objective of the summit? To exert a positive pressure on the climate negotiations carried out by 195 national representatives in Paris.

On this occasion, mayors and local elected representatives adopted a common declaration "A decisive contribution to COP21" that recognises local and regional leaders' important role to play in charting the course to a low carbon future. The declaration also sets a series of concrete goals that mayors commit to achieve to ensure a sustainable future.

“We commit collectively to support ambitious long-term climate goals such as transition to 100% renewable energy in our communities, or 80% greenhouse gas emissions reduction by 2050,” says the declaration. Besides, the signatories commit to cooperate with relevant partners, such as national governments, research centres or the private sector, to reach their goals.

Several local and regional governments’ networks were mobilised, including the Council of European Municipalities and Regions (CEMR), PLATFORMA, C40, ICLEI and our global organisation, UCLG.

CEMR and PLATFORMA were represented by their President, Annemarie Jorritsma, who declared: “Mayors have a range of powers hey must use to tackle climate change. I am proud that CEMR and PLATFORMA are here today to demonstrate the commitment of European cities and regions to […] address one, if not the most pressing challenges of our times.”

During the summit the European Commission and Michael Bloomberg announced a partnership between the Covenant of Mayors and the Compact of Mayors to streamline reporting systems that are working to help cities around the world measure their work.

The Compact of Mayors is an international coalition of mayors and local and regional leaders pledging to reduce greenhouse gas emissions, enhance resilience to climate change, and track their progress transparently. To date, nearly 400 mayors have joined the initiative.

On 4 December, in the margins of the COP21 negotiations, 1,000 mayors from all over the world gathered for the Climate Summit for Local Leaders in Paris. The event was Co-chaired by Anne Hidalgo, the mayor of Paris and Michael R. Bloomberg, former mayor of New York. Its aim: to showcase their initiatives and solutions to reach a universal climate change agreement.

Declaration "From the World Summit on Climate and Territories to the COP21", adopted on 2 December by the networks of non-party stakeholders, including subnational and local governments.

CEMR and its members associations' policy position on the international negotiations on climate.