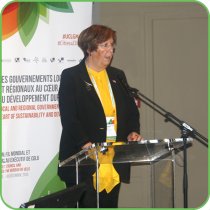 The arrival of refugees has been intensified in Europe in the past years. However, this is, undeniably, a global challenge resulting from a wide range reasons - including wars, economic crisis and environmental aspects - that cities and regions worldwide have to face as they will be those in charge of integrating asylum seekers.

Conscious of this, our global organisation (UCLG) brought to the table the international dimension of the current refugee crisis during its world council on 4 December. The event was organised in the margins of COP21 and the Climate summit for local leaders, and it served as a platform for mayors and councillors to discuss and share their commitment to face this emergency.

In the context of the climate negotiations taking place in Paris, the Mayor of Barcelona, Ada Colau, presented a motion calling on cities worldwide “to develop policies that will prepare our territories.” Her intervention emphasised the urban and environmental dimension of the refugee crisis. It also called on the international institutions to ensure a specific focus on urban crisis within the COP21 negotiations and asked for the creation of a working group of UCLG to deal with the refugees crisis.

Following Ada Colau´s proposal, CEMR President, Annemarie Jorritsma declared: “The refugee crisis has hit the European continent hard, and cities, towns and regions have clearly been leading the response to the crisis. We have been very active in echoing the demands of European local governments towards European institutions," this is why "we welcome UCLG´s proposal since it will help strengthen this endeavour at the global level", for instance, by supporting towns and regions to develop peer-to-peer collaboration.

CEMR and its association members have launched a study to evaluate the needs and the situation to host and integrate refugees in European towns and regions The results will be published in 2016.