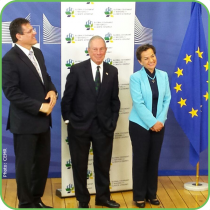 “The merger of the Covenant of Mayors and the Compact of Mayors is a great step to combine everyone’s efforts to tackle climate change and fulfil the Paris agreement of the COP21”, stated CEMR Secretary General Frédéric Vallier, concerning the new “Global Covenant of Mayors for Climate and Energy”, launched today.

The Global Covenant of Mayors is the world’s largest coalition of Mayors who voluntarily commit to tackling and adapting to climate change by implementing ambitious action plans and strategies. This merger is an initiative of EU Commission Vice-President for Energy Maroš Šefčovič, UN Special Envoy for Cities and Climate Change Michael Bloomberg and UNFCCC Executive Secretary Christiana Figueres.

CEMR believes this new Global Covenant will reach its full impact with the early involvement of towns and cities in the process from an early stage. To this end, CEMR wishes to offer to strengthen the political governance by:

As the European section of United Cities and Local Governments (UCLG), a founder of the European Covenant of Mayors and the coordinator of the organisations involved in the creation of the future Sub-Saharan Africa Covenant, CEMR is committed to guaranteeing the full involvement of Mayors in this process.

We wish great success to the new integrated initiative!