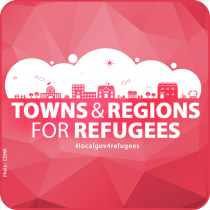 Brussels, Paris, Lesbos and 100+ mayors call on states to keep their promises

Mayors, local and regional leaders from all over Europe are uniting around the Council of European Municipalities and Regions’ (CEMR) call to urge member states to keep their promises on asylum and integration policy.

This petition comes at a time when the European Parliament has just adopted a report that supports CEMR’s main requests: the implementation of targeted funding for towns, cities and regions; as well as setting up a solid partnership between all different spheres of government. In this spirit, CEMR calls upon member states and European institutions to follow the same path in the field of asylum and integration policy.

Although mayors and local leaders pursue their mission to host refugees with full determination, they cannot be left alone to face the key challenge of social integration. To keep their promises and overcome this humanitarian crisis, they need real support from all levels of political leadership, from national governments as well as from the European Union.

Last summer, heads of state and government agreed on a plan to relocate 160,000 refugees over a period of two years. One year later, although a vast majority of Europeans want increased intervention from the European Union on migration issues, its record on the matter is far from great. Less than 3,000 refugees have been relocated to any European country. These numbers alone show the inaction demonstrated by some of our national leaders. As heads of state go from one European summit to another, local and regional leaders mobilise support and take action.

In its call, CEMR and its member associations call upon member states to make the following commitments:

•    Implement well managed and monitored relocation procedures; going a step further than the agreement reached in September 2015 for the relocation of 160,000 refugees in Greece and Italy, under the protection of international and European law. This fair, supportive and permanent relocation system for refugees in all EU countries needs to be done directly from the main registration centres and EU neighbouring countries, guaranteeing them safe passage.

•    Towns, cities and regions have to be able to align both the regulation of migration flows and the pursuit of local public action for solidarity. To this end, European institutions and member states need to guarantee access to the necessary resources to host refugees, via targeted financing for the towns and regions that host them.

•    Financial support has to go hand in hand with a consultation between local, regional and national governments in order to better coordinate operations and to relocate refugees in a fair and equal manner between all towns and regions in Europe.

This call was adopted at the occasion of CEMR’s Policy Committee meeting, on 20 April in Nicosia. To date, the call is supported by 120 signatories. The full list of signatories is available here.

Translate
How to participate?

Do you wish to take part in the campaign and support the call of mayors and local elected representatives? Sign the online petition on change.org.

We also invite you to exchange with us via #localgov4refugees.