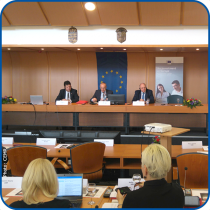 The secretaries general and directors of CEMR’s member associations met in Budapest, on 27-28 October 2016. Items on the agenda included CEMR's work programme for 2016 and 2017, UCLG presidency as well as local governments' vision of Europe in 2030.

Two discussions were held alongside the meeting: one on Europe's enlargement, the second on the follow-up of the Paris climate conference (COP21). Speakers included deputy secretary general of our Serbian Association (SKGO), Zorica Vukelic, the representative of the network of associations of local authorities of South-East Europe (NALAS), Boran Ivanoski, Climate Alliance executive director, Thomas Brose, as well as the Committee of the Regions' rapporteur for the Covenant of Mayors, Kata Tüttő.

Discussion then moved to CEMR’s internal affairs. An exchange of views took place on the renewal of CEMR and UCLG's decision-making bodies, the COP22, Europe 2030 and our work program for 2016 and 2017. CEMR's brand new extranet was also disclosed and secretaries general were given the opportunity to comment and react on the 'members only' new tool.

The meeting was co-organised by CEMR's Hungarian association (TÖOSZ), at the invitation of the mayor of Budapest's 13th district, József Tóth. The next secretaries general and directors' meeting will take place in Spring 2017. Also mark your calendar for CEMR's Policy Committee meeting on 12 and 13 December, in Maastricht, with the renewal of CEMR's decision-making bodies and spokespersons as its main highlight.