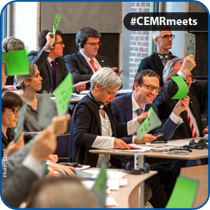 You were a part of it!

We, the CEMR secretariat, want to thank you for your presence, participation and input at our Policy Committee, which took place in Maastricht from 12 to 13 December 2016.

It was both a productive event and a moving experience, with so many inspiring local and regional leaders and experts – around 180 participants from all across Europe.

Our most heartfelt congratulations go out to all new members of the Policy Committee upon their election – and in particular to President Stefano Bonaccini, Co-Presidents Rainer Haas and Gunn Marit Helgesen, Chair of the Financial Management Committee Christine Oppitz-Plörer, as well as to our eleven vice-presidents and six executive presidents.

We very much look forward to working with you in the months and years to come.

Want a quick and comprehensive overview of what happened? Here are the key outcomes of the summit:

Did you know that we have the perfect new profile picture for you? Just flick through the professional photos taken at the Policy Committee on CEMR’s Flickr.

We are also delighted to see the debates went far beyond the realms of the building in which the Maastricht treaty was signed, as the event’s hashtag - #CEMRmeets - reached the top 5 trending topics on Twitter in Belgium.
That’s it from us for today – many thanks again for everything you brought to the Policy Committee, and we wish you wonderful end-of-year celebrations.