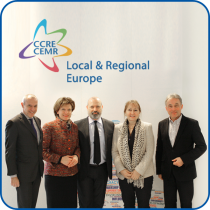 CEMR’s new president, co-presidents and chair of the Financial Management Committee met in Brussels on 18 January, at the invitation of CEMR secretary general Frédéric Vallier. The purpose of the meeting? To get acquainted with CEMR’s work programme for 2017, develop political priorities for the new mandate (2017-2020), but also to get to know CEMR’s staff.

CEMR leadership spoke with one voice to underline the need for an active engagement of local governments and citizens in the future of Europe. At a time when populism and scepticism seem to grow from east to west, north to south, hurting the special bond between the European project and European citizens, it is essential to engage Europe in a new direction. Towns and regions across Europe want to be active in this endeavour and involve all citizens, including European youth.

The following representatives were present:

This meeting was also an opportunity for President Bonaccini to send his best wishes for 2017 to all:  “Let’s build bridges, not walls – as CEMR president, this is my wish for 2017.”