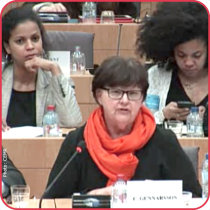 5 proposals for an inclusive, decentralised and simplified future

“EU citizens live in towns and cities of all shapes and sizes. For all citizens to be included, cohesion policy should ensure small towns and large cities are involved when designing investment priorities and delivering EU funds.” Mayor of Sala and CEMR spokesperson on cohesion policy Carola Gunnarsson laid out CEMR’s vision for the future of cohesion policy in a speech delivered at the European Parliament on 28 February.

Carola Gunnarsson put forward European local governments’ 5 proposals for the future of cohesion policy. By taking on these proposals, cohesion policy can rhyme with equality and efficiency in Europe’s territories.

Because beyond just having a vision, it is necessary to give a full strategic orientation to cohesion policy and make EU progress consistent with global progress in this field (such as Habitat III or the Paris climate agreement).

No territory should be left behind. The cohesion policy has to work for all European territories, when designing investment priorities and delivering EU funds. This requires a bottom-up approach, stronger central-local working partnerships and a legally binding partnership principle.

They know what their own territories need. This requires a stronger focus on the place-based approach and Integrated Territorial Investments (ITI). Moreover, having one single set of rules for the five funds that make up the European Structural and Investment Funds (ESIF) would be significant progress.

4.    Simplify cohesion policy for a maximised use of funds

Too often, towns with smaller capacities struggle to access funds. Simplification and cutting red tape is essential for their access. In fact, during the debate, Commissioner for Regional Policy Corina Crețu called for a simplification of cohesion policy herself.

Translate
Carola Gunnarsson delivered her speech at the occasion of the European Parliament’s Committee on Regional Development (REGI).

Commissioner Crețu was also present to exchange with participants on the future of cohesion policy.