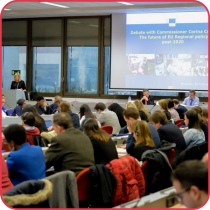 “There are too many layers of management at the moment in structural funds, too many disparaging overlaps, instruments and funds.” This statement was made by CEMR’s representative, Serafin Pazos Vidal, who is also the head of the Scottish association’s (COSLA) Brussels office, during the debate organised by the European Commissioner for regional policy, Corina Crețu, on the future of cohesion policy after 2020.

This event, gathering regional representatives and local government associations based in Brussels, was an opportunity to hear the views and thoughts of the main managers and beneficiaries of cohesion policy.

Many of CEMR’s member associations were present, such as our English association (LGA), our Scottish association COSLA and our Dutch association (VNG). They spoke with one voice, the local voice, to stress the importance of the partnership principle, territorial inequalities and the simplification of cohesion policy. On this basis, Mr Pazos Vidal asked the Commissioner “how the current structures and aims can be reformed” and “how ambitiously they can change” to simplify access to and use of European funds.

Commissioner Crețu then replied that the debate on the reform had already started within the different institutions, “because this will be the most important topic [in the future],” before adding that “we already have some ideas already to reform this policy [by being] more focused on key instruments, more focused on administrative capacity, and the strong link with reforms.” This is essential, especially concerning structural reforms (country-specific recommendations). Finally, the Commissioner wanted to make clear that “simplification, of course, is at the core of our policy.”

28 February: Mayor of Sala and CEMR spokesperson on cohesion policy Carola Gunnarsson will speak at the European Parliament’s Committee on Regional Development (REGI)