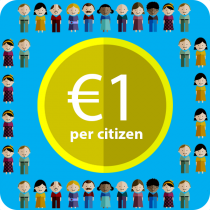 €1 per citizen is a small price to pay to boost democratic engagement in the EU. This is the Council of European Municipalities and Regions’ reaction to the European Parliament’s adoption of its report on the Europe for citizens programme, on 2 March. The report calls to increase the programme’s budget to €500 million - €1 per citizen. CEMR has been advocating this for many years.

Now, Europe’s towns and regions urge the Commission to include the €1 per citizen budget in its mid-term review report on the Europe for citizens programme, and for the Council to follow suit in the upcoming programming period.

This programme funds hundreds of bottom-up projects across Europe, led by citizens, networks of towns or twinned towns. Its aim is to foster a Europe in which citizens show democratic engagement, embrace civic participation and share their cultural diversity.

Furthermore, Europeans have proven their keen interest for the programme. Each year, around one million people take part. The problem is, out of all the submitted projects, only 17.5% were granted in the last two years. With a €500 million budget, however, we could unleash the full potential of the programme and reach almost three million people per year.

This week, the Commission has presented different scenarios for the future of Europe and the Parliament has adopted its report on the Europe for citizens programme. In this context, CEMR Policy Officer for Governance and Citizenship, Carlos Mascarell Vilar, stressed: “The heart and soul of the European project will always come from the local level. Strengthening this programme would come at a crucial point in time for the future of Europe, as in a period of growing populism and nationalism, it enhances mutual understanding and dialogue between European citizens. We are confident the Commission and the Council will realise the importance of this programme.”

10 April: European Commission: deadline for public consultation for the mid-term evaluation of the Europe for Citizens programme 2014-2020