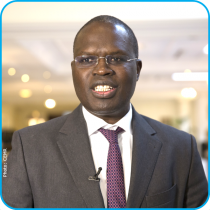 CEMR requests clarification on arrest of mayor of Dakar

The Council of European Municipalities and Regions requests clarifications from the Senegalese authorities on the arrest of mayor of Dakar, Khalifa Sall, also president of United Cities Local Governments Africa and secretary general of AIMF (International Association of Francophone Mayors).

Reacting to this arrest, CEMR president, Stefano Bonaccini, president of the Emilia-Romagna Region, declared: “We have been informed with great concern of the arrest of mayor of Dakar, our colleague and friend Khalifa Sall. In this particular moment, on behalf of all members of CEMR, I wish to express my solidarity to the mayor of Dakar. Khalifa Sall is a well-known and engaged mayor, an example for many of his colleagues. We call on the Senegalese authorities to respect the democratic principles of the rule of law and to ensure that the democratically elected mayor of Dakar will be treated fairly.”